Sheds Then and Now 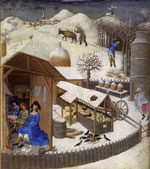 The word shed has been part of our language for many centuries. It derives from an Old English word variously spelled shadde, shad or shedde. All these words for shed derive from an Old Teutonic/Anglo-Saxon root word for separation or division. (Anglo Saxon, a primary source for modern English, developed from the related dialects spoken by hoards of Saxons from northern and central Europe who repeatedly sacked and occupied Great Britain.) The first known instance of this derivation appeared in 1481: "A yearde in whiche was a shadde where in were six grete dogges."1

Shud—from the Anglo Saxon for cover—is another Old English word that may have contributed to the meaning of our shed. Some dialects in England still call sheds shuds. Here's a definition from 1440: "... schudde, hovel, swyne kote or howse of sympyl hyllynge [covering] to kepe yn beestys."2, 3

We still keep beestys, like dogges, in storage sheds, as well as many other animate and inanimate possessions. Either Anglo Saxon derivation—shadde or shud—makes sense and combining them produces separate cover.

Shed as Concept
Shed is as profound a concept as house. We humans have an intrinsic need for storage, just as we have an intrinsic need for a roof over our heads. We shelter ourselves and our possessions in our houses. But the primary purpose for a house is to shelter people. When our house is not big enough to hold all our possessions, we create a storage shed to put them in. We don't move into the storage shed and leave the house to our possessions. (When our possessions become too large or numerous for a shed, we move them into barns, warehouses, etc. Enough said about these larger structures, though, because this article is about sheds.)

Away in a manger—An illustration of the distinction between home and shed is the Nativity story. The pathos of Joseph's and Mary's predicament stems from having to await the birth of their child in a cattleshed. The shed provides shelter, but not the kind of shelter deemed appropriate for people.4

Sheds Then
Prehistoric people built their homes and sheds from whatever the local geography, climate & materials would allow. Early Egyptians built underground silos lined with reed basketry to store grain. Early Europeans built shelters from mammoth tusks and skins.5 And as everyone knows, Eskimos did and still do build shelters from blocks of snow and ice. Whatever was used for primary dwelling places was also used for storage, whether within the home or outside of and perhaps separate from it.

Humans living in caves used smaller caves or alcoves within caves for veritable storage sheds. The Anasazi (ancestors of modern-day Pueblo Indians) were a people who lived approximately from AD 1 to AD 1300 in the American Southwest. They occupied both natural cliff-side caves and caves man-made from soft volcanic rock. A storage alcove is evident in this picture of a cave dwelling.

With the emergence of self-standing shelters, special-purpose structures also began to appear. Over time, the Anasazi extended their cave homes by constructing elaborate rock and masonry spaces for daily living, storage and religious rituals.6

Archeological Significance of Storage Sheds
Archeological studies of ancient storage shed remains tell volumes about a civilization: what the population ate, what animals they domesticated, what they hunted, how they farmed, what they manufactured. For example, in southern Italy an ancient shed's tile roof had collapsed on top of a collection of lumber used to make furniture. The excavators found organic matter under the roof identifiable as olive, grape, willow, poplar and maple wood. The presence of maple wood, used in Roman times exclusively for fine furniture, indicates that the storage shed was part of a workshop that produced furniture for a wealthy clientele.7

One significant find, again in Southern Italy, was not the remains of a shed, but a collection of bronze tablets dating from 330-280 BC. The tablets inscribed in Greek were exact and detailed instructions for what to build on land that was sacred to the god Dionysus. Included among the mandated structures was "a shed for storing straw" to measure "not less than 18 feet in length and 15 feet in width." Here, written in bronze, if not actually in stone, is the definition of a typical storage shed that would make sense to us today.8

Sheds for the Wealthy
The wealthy have always been able to afford small extra buildings that are often as opulent as the main house. And the wealthiest have even put resources into erecting extravagantly useless structures. English follies are a case in point. In the 17th century, English aristocrats who had made the Grand Tour of the continent wanted to recreate ancient ruins and landmarks at home. The English folly was born.9

On the grounds of the Stowe School in Buckingham, England, are many follies built in the 1700s. One example is the Palladian Bridge that impressively connects two banks of a small pond.

King Alfred's Tower is a folly in Wiltshire, England. It arguably serves no purpose although it is certainly an impressive sight and affords fantastic views to those who climb to the top.10

In our own country, the grounds of Thomas Jefferson's Monticello include elegant small buildings that serve shed-like purposes. A beautiful one is this brick garden shed. To Jefferson's credit, however expensively these grand sheds were built, they at least served a purpose.11

A slight structure built for shelter or storage, or for use as a workshop, either attached as a lean-to to a permanent building or separate; often with open front or sides. A special purpose is often indicated by a defining word prefixed, such as cart-, goat-, tool-.

Sounds like the storage sheds of old, doesn't it?

*inthe sense of the noun shed that we're discussing. There obviously are many other meanings for shed as both a noun and a verb.

In our 21st-century, middle-class, property-owning society, countless citizens—not just the wealthy—have the wherewithal to install one or more storage sheds on their property. And there are countless purposes to which these sheds can be put. In fact, any modest-sized structure built to shelter anything except people could be called a shed.

For starters, here are just a few reasons to have a storage shed:

Undoubtedly you could add your own important reasons for a storage shed to this list.

Sheds in Modern England
England is a land of gardeners devoted to their garden sheds. According to one survey, 20% of the population owns one. This tradition of the Englishman's love for his shed inspired a book, Men and Sheds, by Gordon Thorburn.

BBC Radio interviewed Mr. Thorburn as well as a variety of shed owners, male and female, to explore the attraction of sheds.12 Mr. Thorburn believes that since Neanderthal man sought out a cave for solace, a place of retreat has been considered a male necessity. With a distinct lack of suitable cavernous spaces in recent times, the male it seems has turned instead to the shed for solace, particularly, Gordon insists, when retirement comes calling.

Click here for the BBC interview. The accents may not be the same as ours, but we can all relate nevertheless!

Where to Get Your Storage Shed
Once you have decided that having a storage shed is essential to your well being, you need to consider how you're going to acquire it and where you're going to put it. The latter consideration is important and best left hfor you to determine, but here are a few ways to acquire a shed:

Why Buy an Amish-made Shed?
The reputation of the Amish for quality workmanship is based on reality, not myth. Aspects of Amish culture—a strong work ethic, values rooted in integrity rather than show, a tradition of expertise in woodwork and craftsmanship—all contribute to the consistently high quality of Amish-made products.

Without sacrificing their commitment to a simple life, the Amish adopt and adapt up-to-date methods and tools in ways appropriate for them. For example, they use power tools in their construction and crafts businesses. but the tools are powered by generators or other ingenuous energy sources so as not to tap into the electrical grid the rest of us rely on. Most enterprises use telephones as part of their ongoing business, although phones are rarely used within the home.

Those who do the work are the core of any enterprise. Although some Amish businesses employ non-Amish, the workers in most Amish shops are family members or from within the same Amish district. They have likely apprenticed in their craft from a young age. Products from such an environment are reliably consistent and of high quality.

All the storage sheds and barns that Lancaster County Barns sells are from just these kinds of small Amish businesses, which are all nearby. We work with them directly on a daily and personal basis since every order is custom made, with the exception of our overstock items.

So who better than the Amish to supply the perfect shed—be it for work or play—for those possessions or that pastime important enough to deserve its very own dedicated space?

Recommended Reading
Recommended reading if you're interested in how the Amish approach the modern-day world of business is Amish Enterprise, From Plows to Profits, by Donald B. Kraybill & Steven M. Nolt (John Hopkins University Press). Here are a few enlightening quotes:

"Business ventures are also bolstered by the resources of their ethnic culture: a rural heritage of entrepreneurial values, a strong work ethic, religious values of austerity & simplicity, cultural taboos on higher education and on certain forms of technology, extensive involvement of family members, small scale operations, attention to artisanship & quality, and an informal but effective system of apprenticeship."

"Many [Amish] entrepreneurs, ... who deal with non-Amish wholesalers and dealers believe that outsiders come to Lancaster County because of its reputation for quality & high-value products."

"The entrepreneurial skills of independence, problem solving, and ingenuity also cultivated on the farm have been critical assets in the growth of Amish enterprise. Bringing a bushel of agrarian values along from their pastoral past, Amish entrepreneurs have applied the thrift, self-sufficiency and sheer stamina of their heritage to their work."

4 The Descent of Peace, by William Blake, an illustration to Milton's Ode On the Morning of Christ's Nativity, http://www.blakearchive.org/.

7 The University of Texas, Institute of Classical Archeology, The Territory of Metaponto, 1981-1982,Excavation in the Sanctuary Area.

8 The University of Texas, Institute of Classical Archeology, The Territory of Metaponto, 1981-1982, Heraklea Tablets. .

9 Follies in the English Landscape, http://www.britainexpress.com/History/follies.htm.